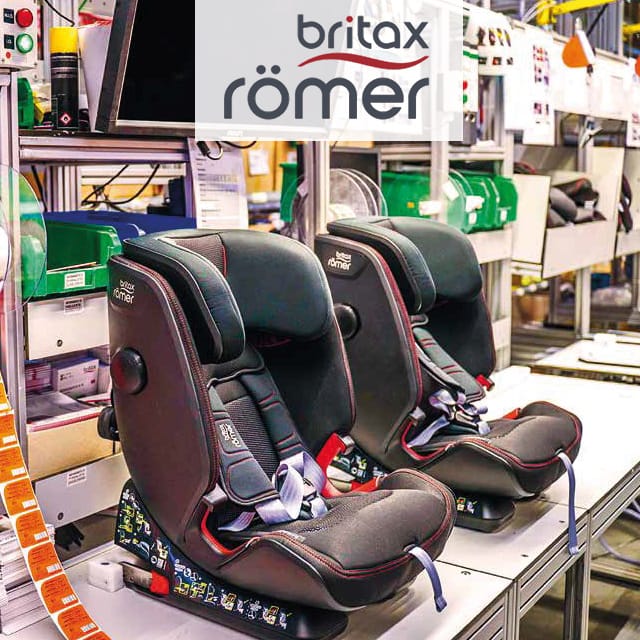 The company Britax Römer was looking for an efficient solution to automate the largely manual production of a new child seat family.

In a pilot system, Britax Römer uses an RFID-based solution for production control and quality assurance at its site in Ulm – entirely without PLC.

Britax Römer developed the first child seat in 1966. Today, more than 500 people work for the German-British company. 90 percent of the child car and bicycle seats currently produced are "Made in Germany" or “Made in Britain”.

The production process of the Advansafix IV consists of 16 individual steps. For each of these steps there is a characteristic that can be checked. This begins with the construction of the seat foundation, the so-called base, and ends with the packaging of the seat in its box. Each successful production step should be documented individually as "In Order" (IO). If a station is omitted or cannot be completed successfully, this characteristic remains marked as "Not In Order" (NIO).

In a pilot system, the five key positions of the 16-step production were implemented as " Proof of Concept".

The entire process is mapped on the data carrier. There is only one permitted sequence of production steps. The system ensures the correct sequence by setting the corresponding characteristic to IO at each of the four stations after a successful assembly stage. This means that only Station 2 can follow Station 1 (affixing the tag). At Station 2, the system checks whether Station 1 was successfully executed at the current seat. Only then does the process continue.

Managing Variant Diversity with RFID
Product Labelling in the Automotive Industry
Maintenance Mgt. of Fire Protection Equipment with NFC
Pump Production at Hermetic with RFID E-Kanban
Spare Parts Logistics with RFID at Scania
Interoperable Systems Drive Digitalization in the Smart Factory
Seat Networks Outbound Logistics of New Vehicles with RFID
Workwear: UHF RFID in Laundry Companies
RFID Tool Identification at VW Engine Plant
Production of up to 60 different catalytic converters with RFID
Transparent Mold Logistics with RFID
Cable Production Processes Seamlessly Monitored with RFID
The German Magazine for RFID & Wireless IoT
The English Magazine
The Biggest RFID & wireless IoT Event in Europe
Get in Touch
Brochure
Cookies are necessary to provide you with our services. By continuing your visit on the website, you consent to the use of cookies.
More information Ok