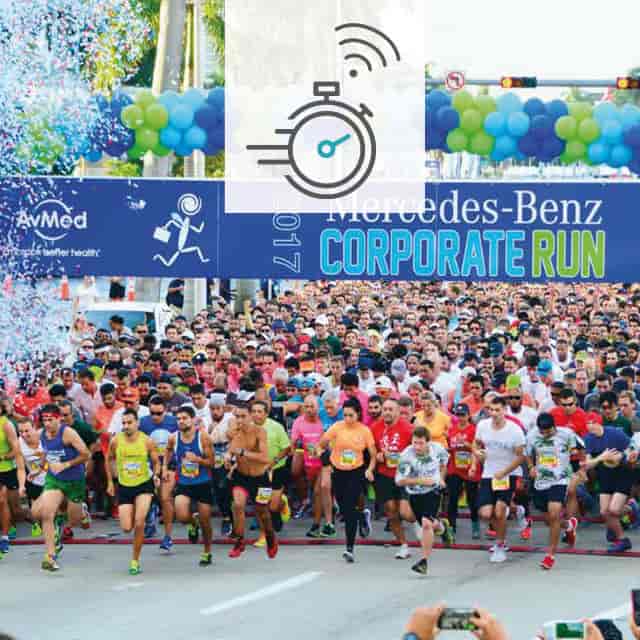 All across the world, RFID transponders on shoes were considered a state-of-the-art solution for recording the exact individual time at competitions. Today, start numbers with integrated transponders are used for running events ranging from five kilometers to ultra distances of 100 or more kilometers.

Whereas the first start numbers with integrated transponders were still using UHF inlays from the industrial or logistics sector, today, tags specially adapted to the requirements of sports timekeeping are used.

Running is a mass sport. In Germany alone, more than 4,000 running competitions take place every year, including almost 240 marathons. More than two million starts are recorded in Germany. The five marathons with the highest number of participants in the world each register over 40,000 finishers, the New York Marathon registers over 50,000.

Time recording at running competitions was a manual process for decades. The times were registered manually with stopwatches and recorded in lists. This was the case, for example, at the first Berlin Marathon in 1974 with 286 participants. The changeover to barcode recording of strip codes on start numbers in Berlin from 1981 onwards also continued to require manual work by timekeepers. In 1994, RFID transponders were used for the first time in Berlin, which were attached to the shoes of the 12,263 runners.

This was the start of chip-based timekeeping without manual labor. However, the chip on the shoe showed deficits in use. There is a risk that runners will forget the chip on the day of the race. An incorrect attachment results in incorrect or no measurement. For rental transponders, deposit systems must be integrated which create an increased administrative effort.

The UHF RFID transponder is integrated on the back of the start number. Foam spacers are used to create the physically necessary distance between the runner's body and the antenna of the RFID inlay. The spacer ensures that the transponders are reliably detected even in wet climatic conditions and sweaty running clothes.

The time is measured by the detection through an antenna mat. At least one mat must be at the finish line. In order to inform each runner after the race not only about the gross running time between the start and the finish line, but also about the net running time, numerous organizers use a second mat at the start line. For longer running distances, the number of antenna mats on the course can be increased.

For example, in a marathon, split times can be taken at the half-marathon mark and 10-kilometer sections. The times can be viewed on displays in real time to motivate the runners. At the same time, a tightly controlled time recording on the course ensures that no runner shortens the running distance.

The UHF technology's bulk recording capability also works in competition with large numbers of participants. At the Mercedes-Benz Corporate Run 2017 in Miami, the organizers were able to record 38,181 runners without malfunction within seven minutes by using a UHF RFID timekeeping system at the start.

BLE and NFC in the Order and Payment Process
Wireless Data Acquisition in Cycling
RFID Solution for Inventory & Localization of Luxury Goods
Contactless Payment on Buses in Oldenburg
IoT and Telematics in Car Rental at Sixt
Smart City Project in Dortmund for Dialogue with Residents
Retailer Puma Opens Interactive Experience Store
Player Tracking in Team Sports with UWB and GPS
Data Portal for Smart City Applications in Tel Aviv-Jaffa
NFC + App + Fashion
Fridge for Ready Meals with UHF RFID
IoT Platform for Smart City Applications in Barcelona
The German Magazine for RFID & Wireless IoT
The English Magazine
The Biggest RFID & wireless IoT Event in Europe
Get in Touch
Brochure
Cookies are necessary to provide you with our services. By continuing your visit on the website, you consent to the use of cookies.
More information Ok