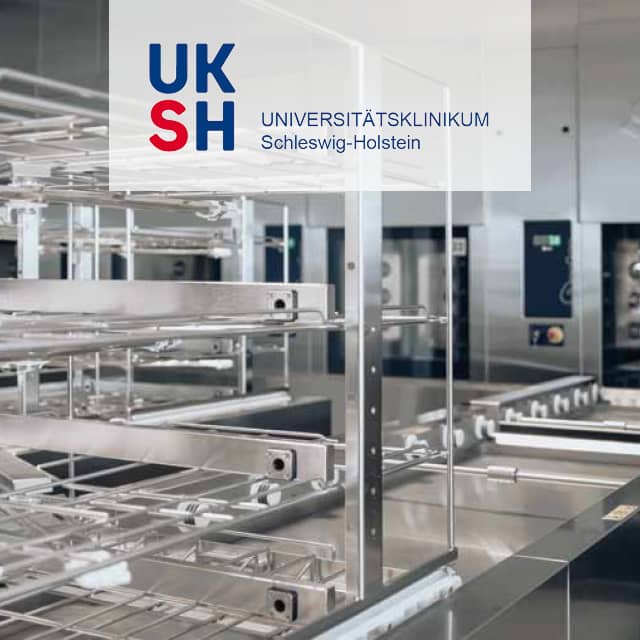 The University Hospital Schleswig-Holstein (UKSH) is one of the largest university hospitals in Germany with over 2,500 beds at the two hospital sites in Kiel and Lübeck. Both sites have been continuously expanded since 2015 and are among the most modern hospitals in Europe. Part of the modernization are digitalization measures in the reprocessing unit for medical devices (AEMP).

The Kiel University Hospital has an elevator for sterile supplies from the AEMP to the operating rooms. There are two floors between the two areas. Due to the short transport routes and times, used instruments reach the AEMP more quickly. This enables faster cleaning of the medical devices, which reduces wear and tear.

Millimeter-Accurate Localization of Breast Lesions with LF RFID
30,000 Metal Assets Tracked with RFID in the Biscuit Industry
Loxam tags over 300,000 Rental Machines with NFC
Digitized Contact Tracing at Bay State College
4,500 shipments daily via 25 km of pneumatic post with RFID
Tracking of Instruments in the OR
500 Employees Benefit from UHF-Based Parking Access
Shrinkage Reduction via Laundry Pool System with RFID
Belfast Trust Manages 40,000 Health Records with RFID
500 Pneumatic Tube Deliveries Tracked Daily with RFID
200 UHF Readers Monitor 73 Rooms of the Emergency Hospital
Improving Inventory Time by 30% at NASA
The German Magazine for RFID & Wireless IoT
The English Magazine
The Biggest RFID & wireless IoT Event in Europe
Get in Touch
Brochure
Cookies are necessary to provide you with our services. By continuing your visit on the website, you consent to the use of cookies.
More information Ok